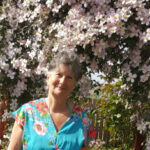 Member since 8 months ago

Brigid P. Gallagher aspired to becoming a doctor but it was not her destiny.
Instead she embarked on studies to become one of the first natural medicine practitioners in Scotland, eventually becoming a tutor for community projects, a woman's prison, and the Open Studies and Summer Schools of Stirling University from 1993 to 1999.
In 1999, she relocated to Donegal, Ireland - the home of her ancestors. Four years later she succumbed to a mystery illness that was eventually diagnosed as fibromyalgia.
"Stopping the World" forced her to reassess her life, and creative writing became a significant aid in her recovery.
She eventually retrained in organic horticulture, worked in the glorious gardens of Glenveagh Castle, and inspired children and teachers to create organic school gardens. Brigid retired from teaching in the spring of 2016.
"Watching the Daisies - Life Lessons on the Importance of Slow" is her inspirational, self help and travel memoir. She has also contributed articles for Sixty and Me, Two Drops of Ink, The Mighty, WomELLE Magazine, plus Travel Stories and Highlights 2019.

"Though many contemporary memoirs are written on related topics, Gallagher’s work is somewhat refreshing; her spiritual healing process is subtle and slow to unfold, rather than abruptly cathartic."
The BookLife Prize

Books & Media
+1
Printed Media
We use cookies on our website to give you the most relevant experience by remembering your preferences and repeat visits. By clicking “Accept All”, you consent to the use of ALL the cookies. However, you may visit "Cookie Settings" to provide a controlled consent.
Cookie SettingsAccept All
Manage consent